The flora plays a leading role in the territory of the Park. This botanic paradise, together with its peaks reaching 1,979m of height, houses more than the half of the 2,600 Sicilian species and about 150 of the 200 endemic species. The most important one is Abies Nebrodensis, with 29 specimens. The wildlife is characterized by the 65% of the nesting birds and by all the mammals which can be found in Sicily. The Park is also well-known for its interesting geological aspects and its landscape. From several points, it is possible to admire wonderful landscapes like Etna, Nebrodi, and the Aeolian Islands, which offer an unforgettable and almost unreal view at dawn and at sunset. 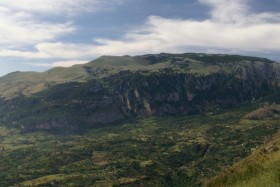 Madonie Park is also of particular interest from a geological perspective. The complex is dominated by mountainous central Pizzo Carbonara , of exceptional scenic and scientific value , and includes an altitude of over 1,600 meters above sea level. In the upper part there is a karst plateau dotted with sinkholes.
Monte San Salvatore (1912 m) is the highest peak of the mountain range along the south- east , and a third core , the most western , extends in the direction Collesano - Scillato , and its highest peak is Monte dei Cervi ( 1754 m). The mountains of the Madonie are affected by karst phenomena, originating from the limestone rocks that vengoni dissolved by rainwater and penetration , giving rise to fascinating phenomena in the Red Cave , into the abyss of the Wind '' and in Sinkhole Battaglietta , all places visited only with experts . The park is distinguishing trait from protected species of fauna and flora , and the detail of the plant kingdom is the Abies Bailing , endangered species among the 50 most endangered plant species in the Mediterranean.