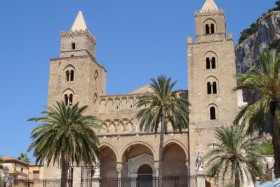 The Cathedral, begun in 1131, in a style of Norman architecture which would be more accurately called Sicilian Romanesque. The exterior is well preserved, and is largely decorated with interlacing pointed arches; the windows also are pointed. On each side of the façade is a massive tower of four storeys. The round-headed Norman portal is worthy of note. A semi-circular apse is set into the east end wall. Its strengthening counterforts that work like buttresses, are shaped as paired columns to lighten their aspect. The groined vaulting of the roof is visible in the choir and the right transept, while the rest of the church has a wooden roof. Fine cloisters, coeval with the cathedral, adjoin it. Two strong matching towers flank the cathedral porch, which has three arches (rebuilt around 1400) corresponding to the nave and the two aisles. Christus Pantokrator in the apsis of the cathedral Church of St. Stefano. Cefalu in 1830, by Carl Anton Joseph Rottmann. The interior of the cathedral was restored in 1559, though the pointed arches of the nave, borne by ancient granite columns, are still visible; and the only mosaics preserved are those of the apse and the last bay of the choir; they are remarkably fine specimens of the Byzantine art of the period (1148) and, though restored in 1859-1862, have suffered much less than those at Palermo and Monreale from the process. The figure of the Pantocrator gracing the apse is especially noteworthy.

On the right side of the wash is written: "Here Cefalino flows, more healthy than any other river, the purest silver, colder than snow" Legend has it that ... Cefalino was generated by incessant tears of a nymph regretted having punished with death, betrayal of his beloved. In these pure running water, until a few decades ago, the women of the country were still in the laundry rinse echoing their voices and their songs full of joy. At the site, accessed by a staircase called "a lumachella", which goes down to a space half-covered by a low ceiling. The water that comes out of the mouths of these three walls, contributes with its noise environment to give this a unique connotation. Finally, the water flowing inside the tanks Wash the leaves, growing from a small cave and reaches the sea. 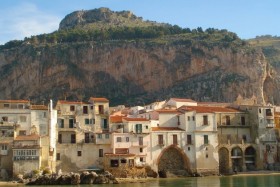 It is a hill of 278 meters overlooking the city and seems to protect her from all evils. It is said that they lived here the giants who lived in Sicily. The Arabs built a citadel and lived in this place until 1063, when the Normans conquered the area. The beautiful Tornatore's "Cinema Paradiso", he shot some of the scenes right on the rock. We will get you through the steps known as "uphill buck." The stairs lead up to the top and run parallel to the walls, they are very beautiful and are characterized by dense vegetation that colors the landscape. At the top you contemplate the ruins of the castle, the ancient Norman fortress, as well as beautiful landscapes. 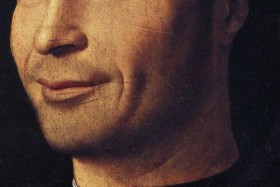 This museum exhibits the collections bequeathed to the town by Baron Enrico di Mandralisca, a passionate 19C collector. There you can see a large numismatic s collection and many other paintings, a must see being the magnificent Ritratto d'Ignoto by Antonello da Messina. Archaeological relics are also on display in this museum including a 4C crater (mixing bowl for wine) depicting a tuna fish salesman, and a large collection of majolica (more than 20,000 pieces)

Located in the fashionable Cefalù Town, our apartments are nestled along one of the most beautiful beach of the island and surrounded by fantastic monuments and landscaped grounds, perfectly blending beach splendor with old-world sophistication.